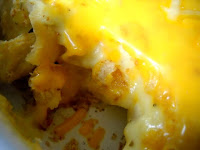 Crunchy and creamy at the same time
I'm not one to experiment while at home, but since I had started defrosting six pounds of chicken, I figured that I needed a big recipe. I looked through the foreign cuisine books first, but not one recipe was good enough to get me out of my cooking rut.
One of my grandmothers' complained that I don't have Puerto Rican cuisine books ( I have the best cookbooks on speed dial :) ).  One of them in mom's library is called Puerto Rican Cookery by Carmen Aboy Valldejuli. I modified her 'Creamed Cheese Chicken' a little considering the palate of my family and the ingredients available.
The result was a creamy, savory main dish that I'm very likely to repeat on a smaller scale when I come back to campus.
Ingredients
2 lb of chicken pieces (I used boneless tenders)
4 cups water
2 tsp salt
4 tbsp of butter
For the White Sauce
4 tbsp butter
1/4 cup all purpose flour
1/2 tsp salt
2 cups milk
1/4 cup of shredded cheedar cheese
2 slices of bread
8 oz of Velveeta (or your preferred sliced cheese)
Start by boiling the water and two teaspoons of salt in a large pot. Boil the chicken for 20 minutes.  While the chicken boils, toast the slices of bread until brown and crumble (it should make about a cup of crumbs).
After cooked, dice the chicken. Melt the first four tablespoons of butter on a saucepan and brown the chicken slightly.
Preheat the oven at 350F. To make the sauce, melt the remaining butter in a second saucepan and combine the flour until combine. Add the milk and cheese gradually until the sauce thickens.
In a deep baking dish, start assembling by placing half the crumbs first. The second layer is the diced chicken. Pour the sauce to cover the chicken as uniformly as possible. Cover with the rest of the crumbs and the sliced cheese last.
Bake for 20 minutes and serve hot.
Posted by bunnyqueen at 4:39 PM No comments:

Flamenco Eggs (or the Man-pie)

Feels great to cook again! :D
Granted, I did cook all through summer, but it was mainly for my family. Cooking for six is mainly about getting a large quantity of good food on the table, leaving little room for error. Cooking for two is much easier on my nerves and allows for more flavors and experiments to happen (and having a boyfriend who will eat anything I serve helps).

As such, I was looking through 400 Best-Ever Budget Recipes by Lucy Doncaster (my go-to book alongside Cooking School and FamilyFun Cookbook), and found this recipe under the Vegeterian section (GASP, I considered eating veggies!). Considering my budget and time, I had to modify the original recipe quite a bit to make it a fuller one-course meal.

Overall, it was a lovely dish and experience to share with my boyfriend, from cooking the filling, to looking as the eggs slowly rose in my itty bitty toaster oven to slicing and serving it like a big meaty pie.

Ingredients
1 onion, diced
1 red and green bell pepper, diced
10 to 12 slices of bacon (substituting the pancetta in the recipe)
1 can of sausages (substituting the chorizo in the recipe), diced
1 1/2 tsp of garlic
1 tbsp unsalted butter
4 eggs
1 generous tbsp of white wine
1/2 cup of breadcrumbs
1/3 cup of roughly chopped cilantrillo
Dash of paprika, salt and pepper
Shredded cheese to top (Optional, I use my standard Italian blend)

Preheat the oven at 350F ("Bake" on a toaster oven). Melt the butter in a large saucepan and cook the diced onion, bacon, garlic, peppers, sausages and half the cilantrillo.

Add the white wine and season to taste. Let it cook for 10 to 15 minutes until bacon is thoroughly cooked and the onion is translucent. Crack the eggs (avoiding breaking the yolk) and set aside.


Prepare a 7" pie plate (or four baking dishes for individual servings) with cooking spray. Cover the bottom with the breadcrumbs completely.

Drain the cooked filling thoroughly and place it inside the pie plate uniformly. Gently pour each egg and cover with the cheese (if using it) and the cilantrillo.


Bake for 8 minutes (10 to cook the yolks a bit more) and serve immediately.
Posted by bunnyqueen at 10:33 AM No comments:

Yes they are...
Sad part is, I misplaced most of the pictures.

My third bento ever :D

Nicest one to date.


Yeah, I'll get to posting again soon enough, I'm pretty creatively stumped when I cook for more than two :B
Posted by bunnyqueen at 10:41 PM No comments:

Hey, I'm getting the hang of this photo business!
Since the last entry, I have cooked very little. So little in fact that I haven't neglected my kitchen like this since my freshman year (ahh, academic freedom, I miss you so).

On the upside (pun not intended), I got myself a little toaster oven recently to indulge in a little baking in my free time. Other than making crispy toast, I was pleasantly surprised that it can bake just as well as my old oven. To try the feature out, I referenced 500 cupcakes by Fergal Connelly, tweaking the Pineapple Upside Cupcake using milk to make a spongier cake.
For the topping
4 fresh strawberries, minced
superfine sugar
honey
For the cupcake
1 egg
1/ 4 cup of sweet butter, softened
1 /4 cup self rising flour
scant 1 / 4 cup milk
1/ 4 cup superfine sugar
generous 1/ 4 tsp of vanilla extract
Start by spraying the cupcake tray with cooking spray and preheating the oven at 350 F.

Cover the bottom of the mould with the minced strawberries (1 per cup should be enough). Drizzle a tablespoon of honey and sugar and combine lightly.

Mix the egg, flour, milk, vanilla and the rest of the cupcake ingredients in a bowl. Whisk until a creamy, but slightly stiff texture is made. Spoon the batter onto the strawberry bottom.

Bake for 22 minutes, being careful not to over-bake. Makes 4 big cupcakes.

If you'd like more cupcakes (I use a very small mould that's just enough for two people), just multiply the ingredients to your liking.
Posted by bunnyqueen at 3:59 PM No comments:


Once again, I regained some of the inspiration to cook and blog a little; maybe it was all the stress from college or lack of inspiration. Either way, I hope to be back better than before!

One of the most notorious things about chili is that most recipes require that it needs to cook for 6-8 hours in a crockpot (one appliance I'm not keen on getting). Truth be told, this recipe (adapted from The FamilyFun Cookbook) takes less than an hour to make since it uses canned beans instead of dry ones. I used the sweet corn chili recipe as my base and substituted the corn with jalapeno to spice up the evening.

First off, crumble the ground meat into a hot skillet with butter and brown.  I took the liberty of lightly seasoning it with the tex-mex seasoning while it cooked.
While it browns, saute the onions in a large pot until just translucent with the oil. Add to the onions the peppers, diced tomato and paste, jalapeno, beans and seasoning until just about cooked (about 15 minutes on medium heat).

Add the browned beef to the bean casserole and simmer for 5 to 10 minutes, until the ideal thickness is achieved. Pour the chili over the steamed rice.

Chop some crispy bacon roughly and top the chili with it and the cheese. Serve immediately.

Serves 6
Posted by bunnyqueen at 1:06 PM No comments:

A creative crisis [Hiatus yet again]

Like the title says, I'm currently going through one.

I haven't been able to make anything remotely creative outside of my Color class (and even that's pushing it).  I have plenty of backlogged posts in the making, but for some reason I can't seem to get myself into writing anything. I haven't cooked in over two weeks, haven't packed any bento, or come up with anything remotely tasty.


Until I find some inspiration and improve my photographing skills (because, I must admit I'm no good at it), I'm calling a small hiatus.


Until then, take care!

Last week was a slow one cooking wise due to the amount of work the new semester's is dishing out. This dish was a quick option for a satisfying dinner for not my boyfriend and I, but for his neighbor and his roommate. It comes from my old standby book, The Best Ever 20 Minute Cookbook by Jenni Fleetwood, adapted to the ingredients available. To save up more time, I used microwavable brown rice instead for the usual steamed white rice.

Heat about a tablespoon of olive oil on a large deep skillet and cook the onion and green pepper until translucent. Season the corned beef with the nutmeg, paprika, seasoning, salt and pepper. Combine the diced potatoes to the corned beef.

When the peppers and onion are ready, add the corned beef hash to the skillet and cook about 10 minutes until . Flatten the hash about to about two inches and make four wells. Break the eggs inside the wells. Season the eggs to taste and cook thoroughly.

Serves 4
Posted by bunnyqueen at 7:03 PM No comments:

bunnyqueen
The Quirky Kitchen is a journal into all things cute, odd and delicious in the small kitchen of a college student. As for myself, I'm an artist with a mathematical mind with a loving family. I was found by a wonderful man on a December night and I have enjoyed life even more ever since. Personal Website, drop by if you like! To navigate the blog, use the menu on top to go to the different areas!